Steve Denny, owner of Steve’s Auto & Truck Repair on 211 Main St. S, grew up in Stewartville since he was a toddler in 1961 and has always liked the small-town feel. As a kid, with his mom and brother he helped out at his dad’s service station, at first pumping gas. He started performing minor fixes on vehicles and “shop work” when he was 12 and continued through Spring 1981, when someone else took over operating the building, and Denny’s dad took a job with the school district.

After that, Denny worked at Mayo Clinic for 8.5 years in the Records Department, then in auto repair at a few different locations before purchasing his auto shop in Stewartville in January 2006. He has worked with automobiles now for 47 years. As owner of Steve’s Auto & Truck Repair, his priority is “to give quality work at a fair price.” Sometimes that involves staying and working late hours until the work is done. For customers who work out of the City limits and may not be able to make it on time to Steve’s Auto & Truck Repair after work, the shop is open Saturday mornings.

Denny’s work commonly consists of break jobs and wheel bearings, he says, and he does everything from oil changes to engine replacement. The most challenging repairs he does are the electronic ones. Auto electronics are computer-controlled and advanced, he explains, and it can get complicated to figure out and expensive to update the equipment needed for those repairs.

He doesn’t have a favorite car to work on because “all vehicles operate the same way; it’s just that the technology used by the manufacturers get a little different.” However, he says, “Muscle cars from the mid-60s to early 70s are always fun,” and the “coolest” car he has worked on was a Maserati, an Italian luxury/performance car.

Denny has also been a volunteer firefighter for Stewartville for nearly 40 years. A one-man show at his shop, if he has to stop what he is doing to respond to a fire, “I try to get at least one layer of grease off my hands first.” He says his customers have always been understanding when he has to close up shop.

Thank you, Steve’s Auto & Truck Repair, for serving the community of Stewartville! 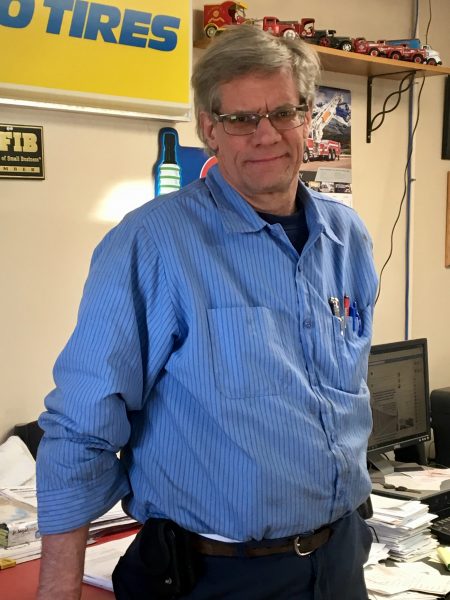