Victra at 91 20th St. NE has been Stewartville’s Verizon Wireless retailer for a decade and one of over 1,000 locations across 46 states since the first one was founded in North Carolina in 1996. Store Manager, Kyler Deetz, explains that at Verizon Corporate locations, customers can buy phones or receive credit on their cell phone bill, whereas Victra provides services for Verizon customers, such as transferring photos, contacts, and data from old to new phones, setting up phone applications, making sure customers are happy with their purchase and get their questions answered, and yes, placing those tricky phone screen protectors on screens so that they are properly aligned and bubble-free.

One cool thing about Victra’s partner, Verizon, Deetz says, is Verizon has disaster-relief bunkers that house backup technology such as portable towers in case of cell phone disasters and crises so the grid will not fail. One such bunker is located in a cave called “The Farm” at an undisclosed location in Kansas City, MO.

Also, Verizon offers customers an application called Track and Trace, which allows them to monitor the temperature and location of sensitive, perishable cargo from their device; an environmental sensor sends real-time alert notifications of the temperature of the freight exceeds the threshold the customer sets.

As the Store Manager and one of two employees at the Stewartville Victra, each day, Deetz joins conference calls with team leaders around the district and the District Manager to discuss district, store, and even individual performance; this data is gathered largely from customer surveys and guides discussions on how Victra employees can give their customers the best experience possible, Deetz says, which includes knowing about current promotions and passing word along to employees and customers.

In the first quarter of 2018, Verizon awarded the Gold Standard of Excellence to the Stewartville Victra. Deetz, who was not yet at the Stewartville location at the time, aims to complement that excellence.

“I’ve always liked customer service,” he says. From 2013-2016, he worked at Fareway in Stewartville and lived 45 minutes away in Wykoff, so during his hour-long lunch, he would visit with a friend of his who worked at Victra. His friend did not want to hire a friend, but when Deetz’s sister, who worked at Victra in Austin, moved away, Deetz was offered a position at that store, where he worked for about the next three years before transferring to the Stewartville location in October 2019.

Talking to people is Deetz’s favorite part of his job, and he says they usually leave in a good mood. He and his employee, Michael, encourage customers to stop by if they have any questions about or need assistance with their Verizon products. 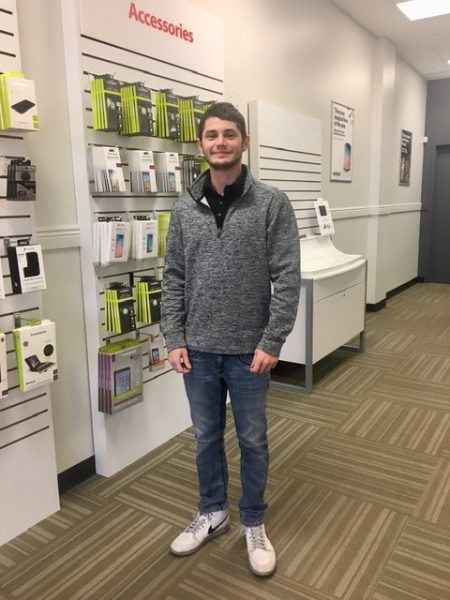